Academic pricing is shown. For-profit institutions should contact TopoGEN directly for a quote. 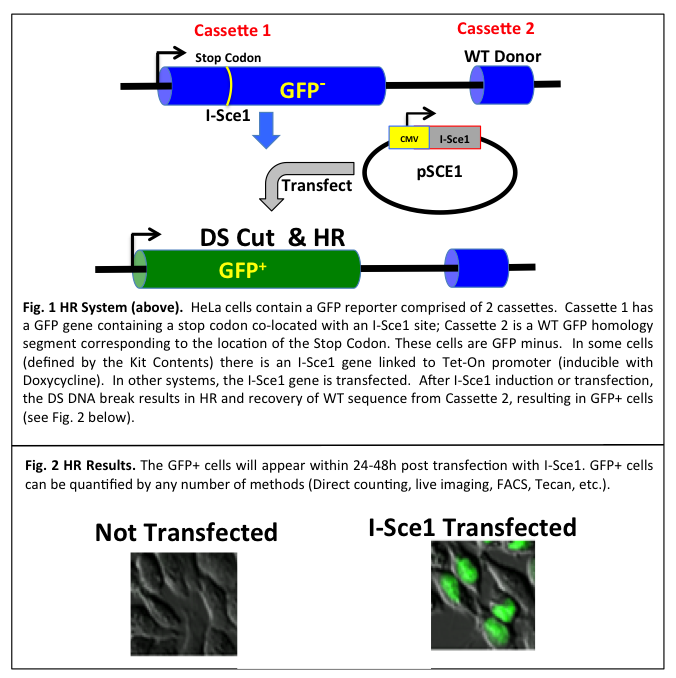 DNA Repair pathways in animal cells can be divided into two main categories:  HR and NHEJ.  HR or homologous recombination is a minor pathway but very important in protecting cells from genotoxicity. HR needs a homologous sequence and is limited to S-phase. A specific reporter based assay for HR can be very beneficial for drug discovery projects, learning more about the process of DNA HR repair and establishing intersecting pathways and druggable pathway targets.

This is the first HR reporter that has been engineered into a neuronally derived cell line.  The SH-SY5Y cell line (SH) is a subclone of a bone marrow biopsy isolated from a 4 year old female patient with neuroblastoma, in 1973.  The original SK-N-SH line was mixture of epithelial cells, as well as neuronal precursor cells.  The current cell line is the 3rd subclone from the original line and displays mostly neuronal phenotypic markers.  Cells are considered neuronal in phenotype due to the expression on known neuronal markers, such as dopamine b-hydroxlase activity, acetylcholinergic, glutamatergic, and adenosenergic activities, as well. In culture, the SH cell line is still a mixture of 2 different phenotypes.  These cells can be forcibly differentiated by treatment with neurotrophic factors. Factors used to differentiate SH cells include retinoic acid (RA), brain-derived neurotrophic factor (BDNF), and tissue plasmin activator (TPA). Treatment with neurotrophic factors induce a more neuronal phenotype in SH cells, in culture, including dendrification, upregulation of production of neuronal markers (see above), and a transition from mitotic cells to post-mitotic, once differentiation is initiated.  Typically, SH cells can be differentiated in normal culture dishes with an inducing factor, however, treatment of dishes with a substrate, such as poly-D-lysine, collagen, or laminin, can be used to facilitate the differentiation process. Once differentiated, SH cells cannot be dedifferentiated back to a dividing cell population.  Thus, HR analyses can be performed in undifferentiated and differentiated neuronal cells.

In HR (sometimes referred to as gene conversion), a donor DNA sequence with homology to both sides of the DSB supplies genetic information to repair the break. The homologous sequence is copied into the broken locus, making the repaired locus an exact copy of donor sequence, without altering the donor sequence (Fig. 1).

A cell based/cell context system has been designed to allow researchers to examine and interrogate the HR process in live SH cells.  The HR Kit uses a twin GFP cassette that converts from GFP negative to GFP positive cells using homologous recombination (HR). DNA repair via HR (as gene conversion) will result since a wild type (homologous) GFP segment is present in close proximity to the DNA break.  To introduce a precise DNA cleavage, a mega-endonuclease (I-Sce1) introduces a DS break in the GFP locus of Cassette 1 (Fig. 1).  It is important to note that the human genome contains no I-Sce1 sites; therefore, an I-Sce1 site in Cassette 1 means that the DS break occurs only at this precise location and not elsewhere in the genome.  The DS break initiates HR and using the WT sequence as a homology template (located in Cassette 2) the gene converts to WT and GFP positive cells appear (Fig. 2).   HR is triggered by a DS break which is achieved by transfecting cells with an expression plasmid for I-Sce1 (Fig. 2).  Inducing HR in the SH cell is easily accomplished by transfection with pSCE1 with results shown in Fig. 3.  Typically about 5-10% of the cells will convert to GFP+ within 48-72h post transfection. 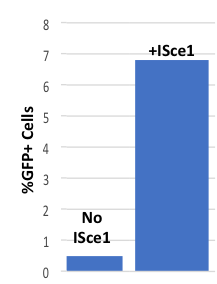 While the process is somewhat slower than that seen in other lines (Hela for example), it allows sufficient time to differentiate the cells and analyze events after they and stop dividing.  More importantly, these GFP+ cells can be tracked and followed by live imaging during and after differentiation.  Any GFP+ descendants can similarly be followed into the future using time lapse imaging.  The You Tube video shows live imaging data.

Customers may request receiving a reporter cell line ready for culture (shipped at ambient temperature). The cells can be stored at 4° C for no more than one week before plating. Other reagents should be stored at 4° C (short term) or -20° C (long term) upon receipt. Customers may also request frozen cells, which must be placed in ultra-low freezer (-80° C) or in liquid nitrogen storage, until ready for use.

If you require additional information about this product, please contact us at: support@topogen.com